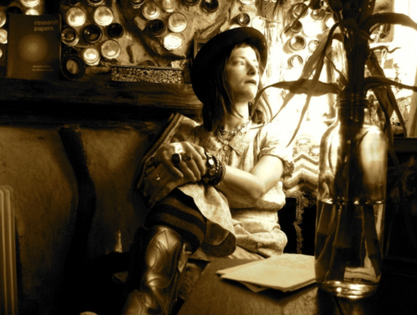 AMY ANNELLE is a songwriter and folk musician whose work balances exploration with a reverence for America’s restless, divergent musical past.  She’s been recording and touring for almost two decades, crafting “richly textured, exotic song-worlds that often bear little resemblance to standard voice-and-guitar folk songs” (Billboard). Over the course of nine albums and countless miles logged on the road, Amy has cultivated a rarefied voice and a repertoire that “blooms with open-hearted, lustful vulnerability and a harrowing naturalistic solitude” (Crawdaddy). In addition to her own work, Amy has sung with Michael Hurley, Victoria Williams, Bill Callahan, Jolie Holland, Ralph White and Jandek.
​
Since her first single appeared in 1998, Amy has released a stream of critically acclaimed albums, first using the moniker ‘The Places’, then her own name. After a few years in Portland, Oregon’s burgeoning music scene, she made a home on the road, touring as a soloist or with ingenious pickup groups which brought together friends from folk, jazz and experimental music circles. In between travels she stayed in different regions of the country, living rough, working odd jobs and immersing herself in the people, places and history around her. Her songs, photographs and essays bear witness to her journey, into forgotten eddies of America and deep within herself. Amy has touched many with her performances, which have taken place everywhere from art collectives and house concerts to folk festivals and rock clubs, from community radio stations and street corners to New York City’s Town Hall. 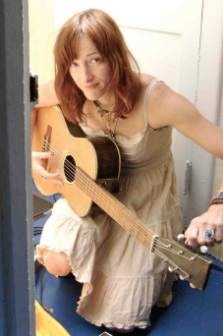 During this time of intense productivity, Amy’s health was in decline.  She continued to tour and record until she suffered a life-threatening medical crisis in 2010, when she was hospitalized and underwent emergency surgery. At that time she was diagnosed with Stage IV endometriosis. The disease had gone undiagnosed and untreated for many years, damaging abdominal organs and putting great stress on her immune and nervous systems.

Since her diagnosis, Amy has had three surgeries and many treatments, which have offered little relief from her severe pain, organ dysfunction and debilitating fatigue. Additionally, she was diagnosed with an an auto-immune disease that causes chronic pain of the muscles, joints, and connective tissue. Amy has been unable to tour for several years, and ongoing health challenges have limited her ability to perform or work locally.

After exhausting her local treatment options, Amy learned about the Center For Endometriosis Care in Atlanta, Georgia. The CEC specializes in treating complex cases such as Amy’s, and she will travel there for excision surgery in early 2017. While there is no cure for endometriosis, excision surgery performed by an experienced surgeon offers patients the best chance of relief from symptoms and regaining quality of life. It is hoped that the effects of the surgery could also help Amy’s auto-immune disease, and that she will get back on her feet, back on the road, and back to sharing her work as a musician and photographer.

Sweet Relief has established this Designated Artist Fund on Amy’s behalf, and all proceeds will go towards her surgery and recovery expenses. Amy is part of a growing grass-roots endometriosis education movement, and advocates for other individuals who are living with this misunderstood and often-debilitating illness. She hopes that by sharing her story, she can help others with endometriosis to connect with needed resources and care. For more information, please see the links below.
Website for Amy Annelle: www.highplainssigh.com
Non-profit endometriosis education site: http://endopaedia.info
Non-profit endometriosis education and support group https://www.facebook.com/groups/418136991574617/
https://itunes.apple.com/us/artist/amy-annelle/id19053725
https://amyannelle.bandcamp.com/album/surgery
Donate Now
How To Help
To donate online click the DONATE NOW button above.

To donate by check:
Write check to:
Amy Annelle Fund at Sweet Relief