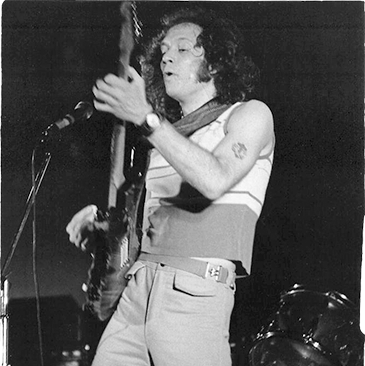 Words cannot express the heartfelt sorrow that we feel by the loss of our friend and dear client, a true pioneer of music and art, Buzzy Linhart. One of the finest songwriters of our time, Buzzy touched the hearts of everyone who knew him with his vibrant personality, transcending lyrical talent and his unchanging positive nature. Despite his diagnosis and wavering health, his unquestionable vivacious spirit never faltered, and he was always one to end a phone conversation with one of his signature cartoon voices. We will always cherish our fond memories of Buzzy and extend our deepest condolences to his family, friends and fans.

“When my life is over the answer will be finally shown, Heaven is the sweetest place that I have ever known.” - William Buzzy Linhart

Buzzy’s family has requested that in lieu of flowers, they would appreciate it if people made a donation to the Rob Max Memorial Fund for Elder Musicians in Buzzy’s name.
A pioneer of the modern folk, blues, jazz, country, rock fusion that emerged from Greenwich Village in the 1960s, Buzzy Linhart may be the last great artist from that era you still haven’t heard of. Known for his energetic long-lasting live shows, Buzzy is a proto-jammer, but his catalog is also very song-focused. Although he had five albums released on major labels between 1969 and 1974, his publishing catalog contains 1000s of songs, many never released. Buzzy has a distinctive and nimble voice, but is also known for his vibraphone and rhythm guitar playing in particular his use of open tunings and early use of Indian raga-style music. He was close friends with Jimi Hendrix, which is how Buzzy wound up in the first recording sessions at Electric Lady Studio resulting in his album “MUSIC” (1971), produced by Eddy Kramer and reissued as “Electric Lady Dream” by BuzzArt Publishing Inc.

Buzzy is a life-long performer with extensive studio credits and his first formal recording session was at age 17 in 1960 providing backing vocals and piano for a regional rockabilly artist in Ohio. He went on to major label sessions with Tim Hardin, Felix Pappalardi, CSNY, Stephen Stills, John Sebastian, LaBelle, Jimi Hendrix and many more. An accomplished songwriter, Buzzy’s most commercially successful song is “(You’ve Got to Have) Friends”, which was Bette Midler’s breakthrough radio hit in 1973. It has also been recorded by Buzzy himself, his co-writer Moogy Klingman, Barry Manilow, The Muppets, and even The Donkey (voiced by Eddie Murphy) in the movie Shrek. Buzzy has also written for television and film as well as appeared in several films including the ground-breaking 1974 comedy “The Groove Tube” with Chevy Chase where he was also the Musical Director. His last full show live performance was his 73rd birthday at Ashkenaz Berkeley in 2015, featuring guest performers such as Harvey Mandel, Will Scarlett, Muruga Booker, singer Jenna Mammina and Dave “Viv Savage” Kafinetti of Spinal Tap fame (and local band SEZU). Acoustic duo The Breedloves took an an early slot and Wavy Gravy took in the whole show!

Buzzy’s Health Story
Buzzy has been on SSI disability since about 1990 based on mobility issues and PTSD. He has been plagued by a number of health issues including a serious visual defect since birth. In 1977, he was rear-ended on the 405 in a borrowed truck while moving in the LA area — he was temporarily without a union job and had no health insurance. In that accident, he injured his knee, hip and tore the cartilage between his ribs. Things got bad, and Buzzy experienced homelessness and unprovoked police brutality that seriously injured his shoulder. Thanks to some old “Friends”, and some welfare programs he has had stable housing in Berkeley since about 1990, and reunited with his oldest son, Professor Xeno (Linhart) Rasmusson in 1992. Older adult-related health issues have included osteoporosis, a series of mild strokes and moderate heart attacks, but he has recovered well and has excellent health in many ways thanks to many years of studying natural health and yoga. Although mobility challenged and living with chronic pain, Buzzy still has a lot to give — he wants to get back in the studio and back on stage to do what he does best.

Buzzy’s Needs
Buzzy’s utilities and rent in his Berkeley Section 8 apartment has nearly doubled in 2 years, his midi-vibraphones are in the repair shop, he needs quality food and supplements and a lot of dental work. More urgently is Buzzy’s need for shoulder replacement surgery and a special orthopedic bed. His health has improved enough to record at home (with his producer bass player roommate Lenny Jenkins), and play out locally. He especially enjoys sitting in with old Friends or making new ones on stage.

A Message From Buzzy:
“Dear Friends, I really have lost everything. Never had much anyway, but now with my injuries, lost or stolen archives, record label rip-offs, and so on, I just am really stuck. I know so many of you already helped, and I’ve never even been able to thank you properly, but I just don’t know what to do. My helpers who get paid minimum wage just can’t do anything special beyond things around the house. I hate to bring you down, but if you have any ideas… Bill Black and Arthur Berggren at BuzzArt Enterprises Inc. are doing great work managing my catalog, but they need a boost as well.”

It would help Buzzy to: Donate, buy a CD, license a song, hire him for a session, or call him up on stage!

Personal Website (under re-construction)
http://www.buzzylinhart.com/
Donate Now
How To Help
To donate online, click the DONATE NOW button above.

To donate by check:
Write check to:
Buzzy Linhart Fund at Sweet Relief