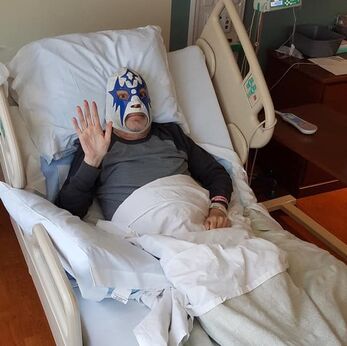 Danny Amis is best known as “Daddy O Grande,” the masked guitarist, international playboy and founder of Los Straitjackets. Los Straitjackets are the leading practitioners of the lost art of the guitar instrumental. Using the music of the Ventures, The Shadows, and with Link Wray and Dick Dale as a jumping off point, the band has taken their unique, high energy brand of original rock & roll around the world. Clad in their trademark Lucha Libre Mexican wrestling masks, the ‘Jackets’ have delivered their trademark guitar licks to 16 albums, thousands of concerts and dozens of films and TV shows.
Danny began his musical career with the Minneapolis’ Overtones, and was then tapped to join the NYC no-wave band The Raybeats. He has worked extensively behind the scenes at Hoboken’s seminal venue, Maxwell’s, and later as Stage Manager for Ralph Emery’s long running TNN show “Nashville Now.”
In 2010, Danny discovered a blood clot after his trip from Spain and was diagnosed with Multiple Myeloma, to which he fought a very difficult battle. He recovered and moved to Mexico, and while he was unable to continue a full touring schedule, he still contributed his songs and guitar to Los Straitjackets’ recordings. In that time he produced several solo albums, as well as albums by Mexico’s Lost Acapulco and Dan Stuart (ex- Green on Red).
For the past 5 weeks Danny has been struggling to recover after suffering a bout of meningitis. He is currently in rehabilitation where he is relearning how to walk and speak, and attempting to overcome his short-term memory loss. All donations to the Danny Amis fund will assist in funding continued speech, memory and occupational therapy in the hopes of returning Danny’s independence in the coming weeks and months
Donate Now
How To Help
To donate online, click the DONATE NOW button above.

To donate by check:
Write check to:
Danny Amis Fund at Sweet Relief