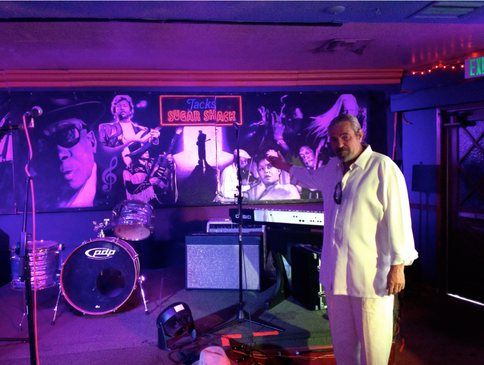 Ed Jennings has long been a champion of musicians and their craft of playing before live audiences as a collaborator, promoter, and bar owner. Eddyʼs long and storied career traces back to working for Bill Graham Presents in the late 70ʼs. He subsequently became the music manager at the Rock n Bowl and the I-Beam in Haight-Ashbury along with Jacks Bar in San Francisco featuring live music. He was also a tireless collaborator and music coordinator of the Haight Ashbury Fair for over 20 years.

Later, Eddy opened Jacks Sugar Shack in Los Angeles where he created a home for legendary blues artists and American roots music, hosting the long-running Ronnie Mackʼs Barn Dance.Eddyʼs striving ethic was to respect musicians and treat them fairly. His motto was “feed them,give them a place to sleep, and always pay them”. Over three decades, Eddy has enthusiastically celebrated artists and provided a welcome forum for struggling, up-and-coming bands, established artists and forgotten legends, occasionally performing with many acts,including Touch me Hooker and Buzz in the System..

Les Claypool will headline the tribute with a special set playing homage to Buck Naked, who worked closely with Eddy and was an inspiration to Les.Also performing will be East Bay Ray, Pearl Harbour, the Jackson Saints, MCM & the Monster,Ted Zeppelin, the Limbomaniacs and more to be announced, plus special guests.This event is for people who care about music and to honor one person whose commitment made a difference in the lives of many musicians and enriched our community.

All proceeds will be collected by Sweet Relief and funds shall go towards helping Eddy in his battle with cancer.
Donate Now
How To Help
To donate online click the DONATE NOW button above.

To donate by check:
Write check to:
Ed Jennings Fund at Sweet Relief