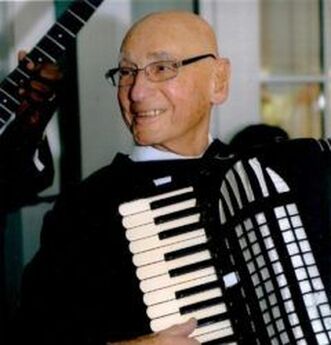 Harold Wax was born on April 9, 1922. As a child he studied the accordion, and by his teenage years he was performing live on radio station WAAT in New York. When Harold Wax was only 19, Artie Shaw invited him to play with the Artie Shaw Band throughout his World War ll service . After WWll, Harold returned to New Jersey and played with the Lester Lanin Orchestra. Based in New York City, the Lester Lanin Orchestra was internationally renown, especially in Europe. Not only did they play at White House functions for decades, but The Royal Family was so fond of their big band music that they hired them to play at the weddings of Charles & Diana and Andrew & Fergie.

Harold put his three daughters through college working nights as a musician and days with his wife Beverly in their retail clothing store. In 1980, they sold their store and moved to Florida. After a brief hiatus from music, Harold rejoined with Lester Lanin’s band for several years, and then eventually formed his own band in 1990-“Harold Wax Music”. Harold led his band and played accordion and keyboard for 18 years in Florida.

In August 2008, at 86 years old, Harold led his band on the biggest job they ever played together- two parties in Quebec. After the gigs, Beverly joined him for 3 days sightseeing. On September 3, 2008 Harold died peacefully in his sleep. As one of his friends put it, “He orchestrated his final performance.”

His band members played “When The Saints Go Marching In” at his memorial service. It was a perfect tribute. While Harold is no longer with us, he continues to live on through his music, and in the hearts of everyone who ever heard him play.
About The Fund
​
The Harold Wax Memorial Fund was initiated by a generous grant from The Erkiletian Family Foundation LLC.  Grants awarded from this fund will assist career musicians 65 and older by supplementing medical benefits and treatment.

Many of our nations elder musicians struggle to obtain necessary medical treatment and are often limited by the medicare program.  This program aims to assist those individuals who dedicated their lives to music and bringing joy to music fans everywhere.

If you wish to contribute to this fund, please click the donate link on this page:
Donate Now
How To Help
To donate online click the DONATE NOW button above.